On Trantino’s book LOCK THE LOCK published by Alfred A. Knopf in 1974 Howard Zinn wrote

The first few pages stunned me and I never recovered. I
Haven’t read a book in a long time that hit me so hard–
a book so fierce, so poetic, so wise, so heartbreaking. It
exposes our time in a way which will embarrass us all
before our grandchildren. 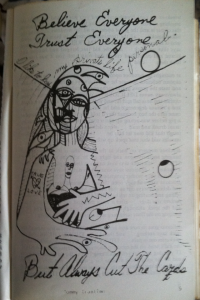 Believe everyone Trust everyone But always cut the cords. 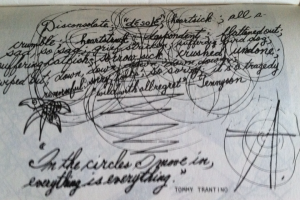 In the circles I move in, everything is everything.

Tommy Trantinos book Lock the Lock was written behind bars, part journal, sketch pad, poetry, essays, what have you. Wiki says he is a :::::

convicted murderer who was sentenced to life in prison for the execution style shooting deaths in 1963 of two police officers in Lodi, New Jersey. He was sentenced to death by electrocution, which was commuted to life in prison after the death penalty was abolished in the 1970s. This began a long battle for parole, which continued until his release from prison in 2002.

Trantino grew up in Williamsburg, Brooklyn. He was expelled from school for truancy, became a drug addict in his early teens and served the remainder of his teen age years in jail for robbery.[1]

Some yrs back i found the book in a used bookstore, so u can find it too. Then a mag called ReMark—defunct? i think, now, published one of his poems in an issue where one of mine was published. i tried to track him down and failed. haha he had a MySpace and i sent him a letter. Lots about him in STROKER 26-27 DOUBLE ISSUE  along with work by Lord Byron Hunt, Seymour Krim, Henry Miller and other fine company.