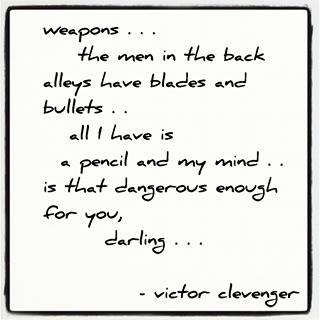 Victor Clevenger is a poet in rural MO. He has a chapbook Inside A Fishbowl, Looking Out (Shadow Ink Publications), a brain, a heart and a book forthcoming with Least Bittern Books.

Charles Potts’ Least Bit collection (2015) Pilgrim & Martel may sound like a vaudeville act but its poet Charles Potts’ latest work by Least Bittern Books, and it’s a stunner. brilliant, ironic without bitterness and so earnest it hurts these are two books (in a single volume)…’pilgrim’ poems and a play—or a play that is a poem, or a play with a poem appendix. or all of these really. just get yr hands on. he articulates with good humour and a tireless succinct; its a ball to read, total nuttah.
$15 shipped to yr door 130 pgs TP, fine cover art and art thru-out by Jeremy Gaulke.

Why is Charles Potts the next poet you read RIGHT now? well, he is perpetually up to something else, alright. even he finds the work in P&M curious and true. 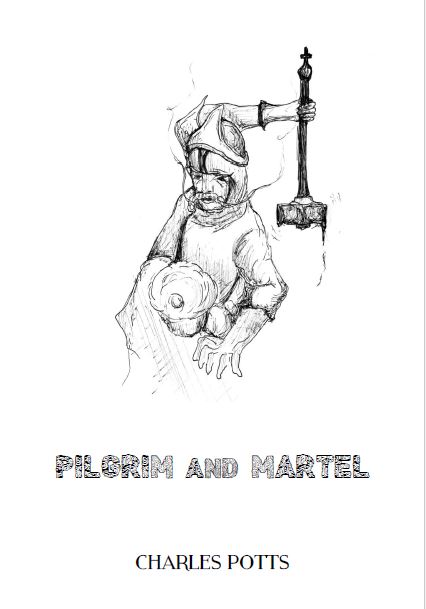 Patrick Ferguson drove all the way from Spokane to Yakima to hear Potts read because he found a used copy of The Opium Must Go Thru in a bookstore and said, “it was the first thing I’d ever read that made me think of the things I was trying to get out of my own head.” i think this is what he does—speak up for what is subtle in us. he projects the inferred or intimated onto a big screen in a dark wooden lodge with the windows covered by American Flags and Chinese Magazines and invites everybody in.

there is a six-degrees-of-Charles Potts thing happening in the small poetry press. the best folk and truest voices are connected somehow to the man. Potts’ various imprints put twenty poets manuscripts in the world. his magazines and endeavors in the late sixties nearly put him in a grave and yet are collectible now, for the poets in his little rags are big names. he edited for five years decades later a tabloid The Temple, famous for including side by side translations of original contemporary poetry in both Chinese and Spanish, the only magazine on earth to ever do that. (Across the North Pacific, an examination of the languages and political behavior of the United States, Japan, and China. Possibly his most famous line of poetry is that, “we will surrender in Spanish to the Chinese.”)

an autodidact geographer and follower of Carl Ortwin Sauer, Potts’ political and economic geographical treatise, How the South Finally Won the Civil War: and Controls the Political Future of the United States, was published in 1995, followed by a ground-plowing treatise in Linguistic Geography,John Oliver Simon, former director of California Poets in the Schools and himself the recipient of an NEA grant for translation, referred to Potts as “…the greatest poet born in Idaho since Ezra Pound…and one of the true faces of North American poetry.”
True to his Idaho and Northwest roots, Potts breeds and raises Foundation Appaloosa horses on Blue Creek in the foothills of the Blue Mountains near Walla Walla.

These poets voices are what set the bar for poetry being submitted to Least Bit.

A collage portrait of each poet emerging from a pond precedes their work in the book.
It is a 6×9 100-page trade paperback, and will be available on Kindle as well (for 2$). 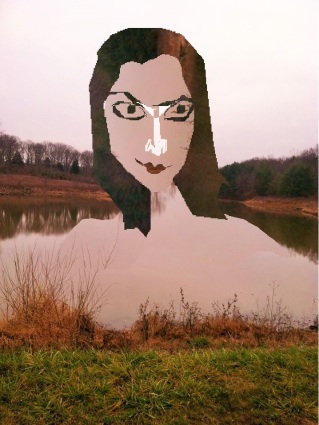 This is the first Least Bit anthology. Poets who are turned on by the work they find inside are encouraged to send their own best work anytime to leastbitternbooks@gmail.com

Least Bittern Books founder and editor Bree has released a book of her growth as a self-taught visual artist, from graphic design and rough drawings for her Green Panda Press (Cleveland 2001-still pressin’ on) to more sophisticated studies of landscape, textual plays, mythology, cultures real & imagined and the nude form.

Do Well of Must is part of her Kentucky Foundation of Women’s Artist Enrichment grant project for 2016. The book is 50 pages full color 8.5×8.5″ trade paperback, and includes a personal narrative of Bree’s recalibration in farmland, KY after her faith had been tried, when magic became as integral to her being as drawing. 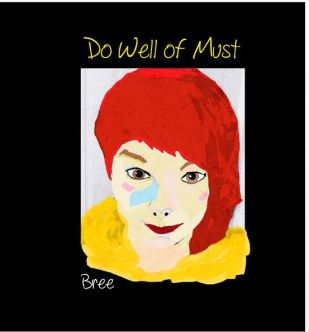 if you would like a copy, visit the Amazon link above, or use coupon code 2SQK26ZH ofr $5 off here  or send 25$ to leastbitternbooks@gmail.com via paypal using the friend/family option, or at long last, check/cash to Bree 147 Marcus St. #4 Pleasureville, KY 40057

Excited to announce e b bortz’s poetry manuscript earth notes and other poems is now available from Least Bittern Books.  bortz is a Pittsburgh poet, but he takes us on vast terrain inside and outside the US, as he bikes, kayaks, hikes or drives his impressions to the page. He often speaks from a natural landscape, tho sometimes clearly from his office desk, about man vs. nature and beauty vs. what has been wasted. His perspective is thotful and provocative. They are love poems as much as nature ones. We imagine u will enjoy what he does with words. 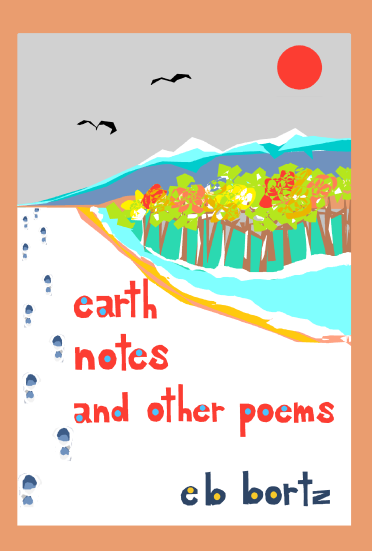 earth notes and other poems is illustrated thru-out with full-color drawings by KY poet Bree, one of the editors here at Least Bit. The book is 100 pgs., costs $14. To purchase send via paypal to leastbitternbooks@gmail.com, or tuck some cash and mail to 147 Marcus St. Pleasureville, KY 40057

yet another review of John Swain’s UNDER the MOUNTAIN BORN (Least Bittern 2015). very different critique, yet nailing the same mystique. 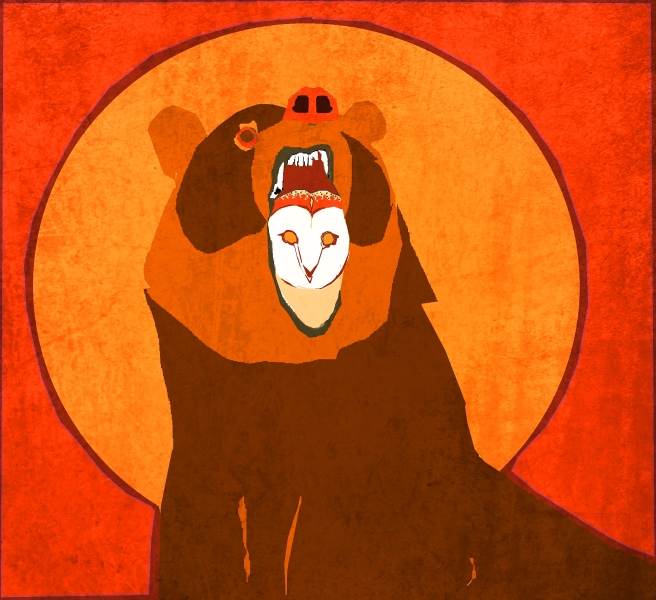 Check this review of John Swain’s UNDER the MOUNTAIN BORN

Doc Sigerson at Red Fez finds words to describe Swain’s inimitable voice, attaching to it the depth and illumination the editors at Least Bittern also discovered in his poetry.

130 pgs of arresting poetry, illustrations and cover art by Bree available here  for $13 or get Swain’s book plus Potts’ and Bree’s books for just 25$ thru LBB  = paypal to leastbitternbooks@gmail.com or snail to Bree 147 Marcus St. Pleasureville, KY 40047

John Swain like Least Bit is Kentucky all the way. His poems are little visits with spirit and animal, heart and landscape, conscience and endurance. If you are not familiar already, you can take a peek inside  his new collection Under the Mountain Born here.

UNDER is 100 poems, the poet’s handpicked carefully honed call and answer to the universe at-large, which includes YOU, so grab a copy up there or down here or or or

or via paypal to leastbitternbooks@gmail.com
*if ordering outside the U.S. please inquire first, regarding postage. domestic shipping free.
Look for Least Bit title by Charles Potts (Walla Walla, WA) in coming weeks, and see SUBMIT guidelines to have your poems appear on the website. See how many things there are for you to do?
April 22, 2015April 22, 2015 ~ Least Bit ~ Leave a comment

Look Up and Up

is the debut poetry collection out of Least Bittern Books, in Henry County, Kentucky, and the poet Bree’s most recent one. The poems pick up where ‘So Damn Sure of Us’ (Night Ballet 2015) leaves off, as Bree recalibrates and finds her permanent address in rural farmlands, staying in a former bordello. She confronts nature, love, faith, magic and renewal. 88 pages (8 is an unbelievable number in many ways and here you get two 8’s), trade paperback, 12 dollars, available NOW!
to order go here

or via paypal to leastbitternbooks@gmail.com
*if ordering outside the U.S. please inquire first, regarding postage. domestic shipping free.
Look for Least Bit titles by Charles Potts (Walla Walla, WA) and Kentucky’s own John Swain- they’re on the wing, so to speak.